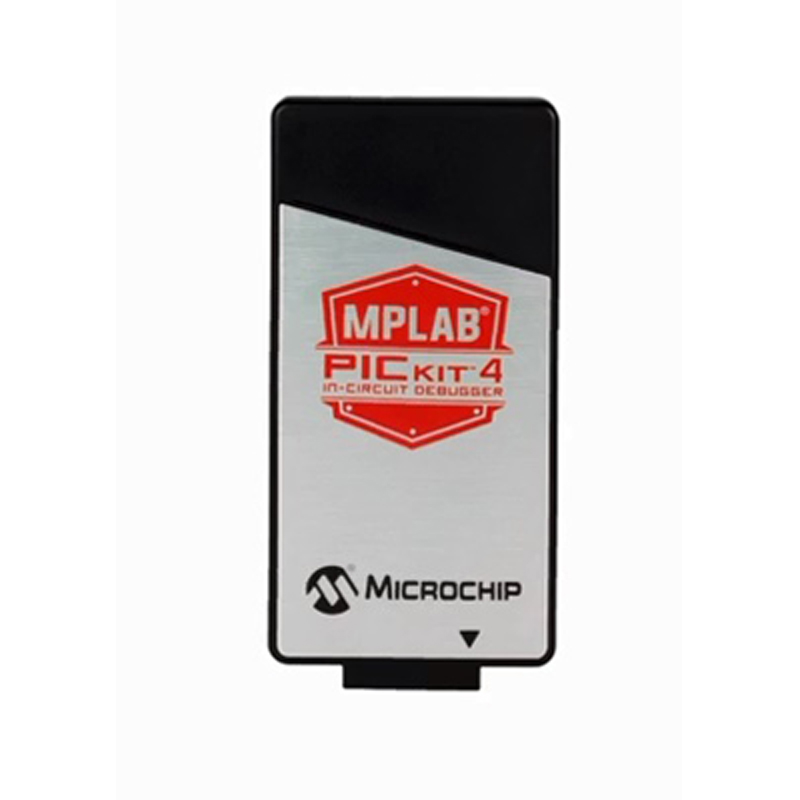 Part No.: MP-Micro-MPLAB-PICkit-4
Fast programming, increased functionality, at the same price as its predecessor, the PICkit™ 3.

The MPLAB® PICkit™ 4 In-Circuit Debugger/Programmer allows fast and easy debugging and programming of PIC®, dsPIC®, AVR, SAM and CEC flash microcontrollers and MPUs, using the powerful graphical user interface of MPLAB X Integrated Development Environment (IDE), starting with version 4.15. The MPLAB PICkit 4 is connected to the design engineer's computer using a high-speed 2.0 USB interface and can be connected to the target via an 8-pin Single In-Line (SIL) connector. The connector uses two device I/O pins and the reset line to implement in-circuit debugging and In-Circuit Serial Programming™ (ICSP™). An additional micro SD card slot and the ability to be self-powered from the target means you can take your code with you and program on the go.

The MPLAB PICkit 4 programs faster than its predecessor with a powerful 32,bit 300MHz SAME70 MCU and comes ready to support PIC®, AVR, SAM and dsPIC® MCU devices, and MPU devices. Along with a wider target voltage, the PICkit 4 supports advanced interfaces such as 4-wire JTAG and Serial Wire Debug with streaming Data Gateway, while being backward compatible for demo boards, headers and target systems using 2-wire JTAG and ICSP. The PICkit 4 also has a unique programmer-to-go function with the addition of a micro SD card slot to hold project code and the ability to be powered by the target board.

*Note: The PICKit 4 is compatible with MPLAB X IDE version 4.15 and later.

Can supply up to 50mA of power to the target

Ease of maintenance and feature upgrade

The Debugger Adapter Board is a connectivity board that gives MPLAB ICD 4 and MPLAB PICkit 4 Debuggers cable compatibility to demo boards with Atmel-ICE, Power Debugger and Segger J-Link style connectors. It supports JTAG, SWD and ICSP protocols in multiple connector formats. It is useful for debugging legacy AVR Xplained demonstration boards with MPLAB PICkit 4 debuggers.